There’s been so much happening the last few days in the world of music tech I don’t really know where to start but I’m going to attempt to focus this blog on one subject….

How is everyone STILL not talking about Facebook and streaming music?

A few of you will know I’ve been ranting about this for a few years now but it seems it’s finally coming true….

Facebook have the potential to become the world’s biggest music and video streaming service…and today they launched tools that show that’s very much part of that ‘ten year plan’ they announced at F8: Content ID / Rights management for content. 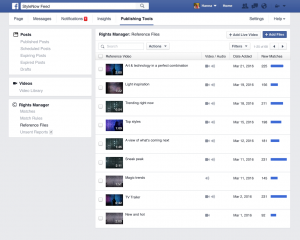 Why is this so important?

How many eye balls?

Messenger has 900 million to be exact as announced at F8 today… WhatsApp has approx 1 billion  and Facebook itself has somewhere in the region of 1.5 BILLION .. oh, and Instagram, let’s not forget that… that’s up there with in excess of 400 million users… so… yes… shit loads of eyeballs.

Why does this matter for music?

Because as part of a roll out today they announced rights management for content. Think Youtube’s Content ID for Facebook….Yeah… that.

What else have they got aside from content ID, a few billion eye balls, consistent daily engagement from all demographics, where people actually hang out and communicate and consume content , show they ‘LIKE’ a band, 360 video, music content that can be shared instantly and… did we mention the forthcoming (and slightly delayed) oculus rift?

This is potentially huge for our industry…and potentially a massive headache for Google which, despite android, does not have the same integrated reach as Facebook on mobile devices….. For a long time now there have been *rumours* of label talks with Facebook and we all know they have a working ad network (we know this because each and every one of you working in the music industry reading this have spent a fortune in ads there the last few years… ) and beyond that they have been testing ad on video…

And…. all this with the major label Youtube re-negotiations….how’s that for timing?

Seriously though… whichever route to monetisation they take (who knows – maybe it’ll be subscriptions at some point as well as ad revenue) this could be incredible for the music industry BUT only if everyone is paid fairly. We don’t need any repeats of *other* deals that were made retrospectively where people are – right now – trying to shove the genie back in Pandora’s box…

Let’s get this one right , eh?

Beyond the streaming potential… one final, but very important thing worth noting with regards to music industry revenue and connecting data points …

In somewhat fortuitous and no doubt entirely coincidental timing Ticketmaster just agreed a deal to sell tickets via Facebook..! (only 5 years after Crowdsurge originally did it… but welcome to the party Live Nation!!) All this in the week that Facebook live video launched too … in what could be facebook’s attempt to submerge Periscope…

Why is all of this important?

Check out my article  on Music Business Worldwide from last year about this very subject… since then… we’ve seen Youtube buy Bandpage, Spotify test ticketing (and figure out who are classed as ‘Superfans’ so these promotions are sent to the right people) and of course Pandora buy Ticketfly…. People refer to this as “full stack” but … just to be difficult I’m sticking with ‘convergence’.

Finally, the dots are being connected and converged. But who’s in the driving seat?

LET’S NOT FUCK THIS UP EH?

LET’S MAKE IT WORK FOR EVERYONE IN THE VALUE CHAIN SHALL WE?